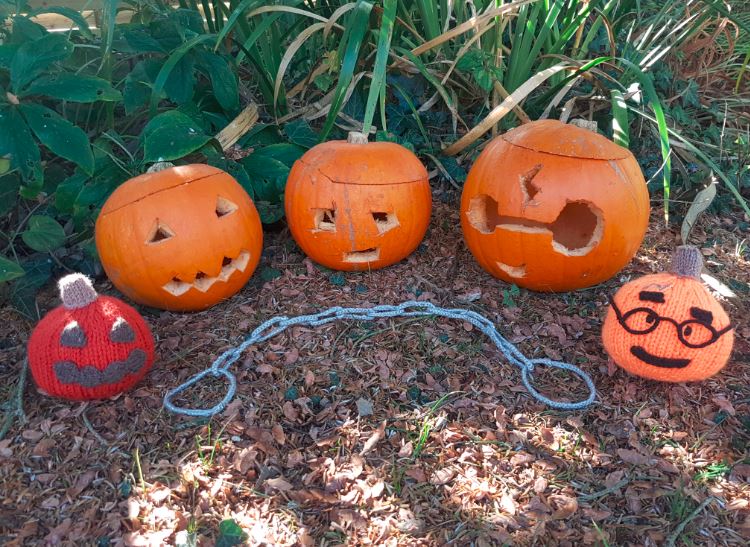 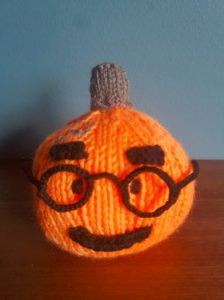 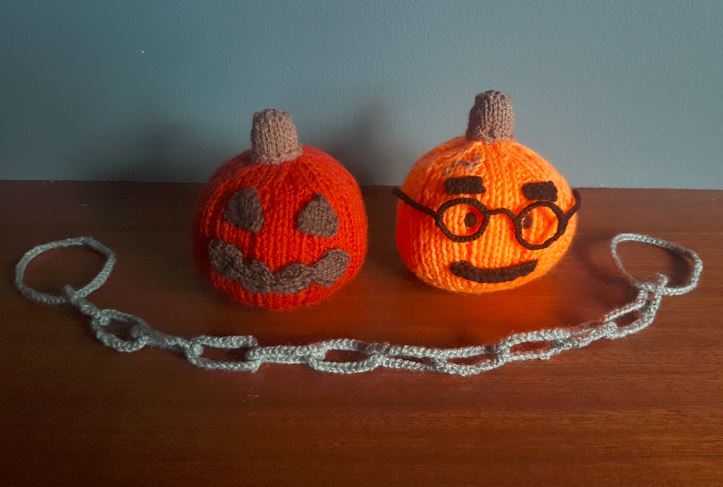 It's the Start of the Knitting Season!

Those cosy nights in by the fire are starting to get more tempting than those evening strolls; welcome to the Beautiful British Autumn. This is also one of the most fun times of year for the kiddies, collecting cycle helmets full of conkers, lots of special sticks and special leaves, and Halloween and bonfire night are on the horizon. 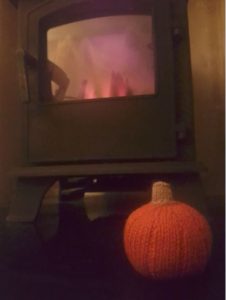 Knitting by the Fire

And so there are plenty of things to have a go at knitting this season. With the help of my own little pumpkins, I've put together this really simple pumpkin knitting pattern. And so if you fancy knitting one to celebrate harvest or Halloween, there are lots of options to make it personalised. Children may wish to help make your knitted pumpkin or its facial features, or even just help with its design, but this is a great Halloween activity for children to get involved in. And this is far less messy than carving out all that mush. 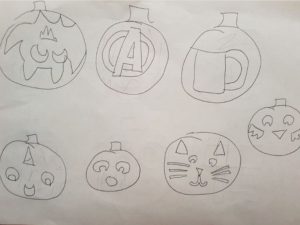 The kiddies love to ask me to make things for them, and so I asked them what kind of pumpkin they would like, and could they do a few designs for pumpkin faces. Caitlin was nagged and nagged and nagged and after two weeks I finally got some pictures (she's nearly 11...), but Charlie gave me a start with three wonderful ones to aim for. 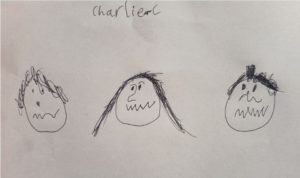 One of caitlins designs and immensely popular around the world - Mr Harry Potter. My whole pumpkin was made easily over a week, and even the finger-knitted glasses didn't take too long, in spite of being a little bit of a fiddly challenge. After trying different ways to make those silly glasses stay the right shape, I did wonder whether I should have just embroidered them on in the first place. My husband might have had a better idea "you should have just used pipe cleaners for that", but that's not knitted! But it was worth a go, as you never know.

At least the children liked the end result, even if they followed it up by saying "I like that orange one because the other one looks like a tomato." Thanks guys, my 'rusty orange' for the other pumpkin obviously didn't quite look the part. 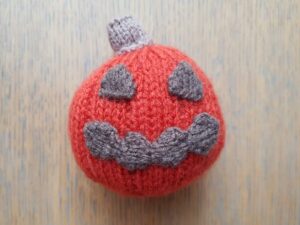 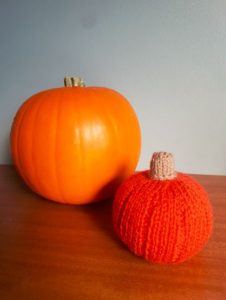 The good news is that any errors or wonky bits that don't work out quite right will add to the character and eeriness of the pumpkin so you can get away with a bit of rushing. It also won't matter so much when the children come along and take it for a cheeky cuddle/squish. Pumpkins themselves also come in lots of shapes, with all kinds of stems. They even come in different colours, so you could also have a go at a ghost pumpkin - Although I can't guarantee that it won't turn out looking like a decorated onion. 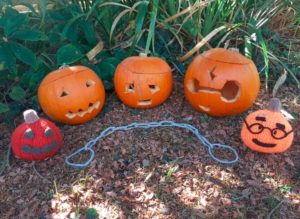 I've got another little halloween idea for my next knitting project (hopefully ready before halloween!) Check out the updates section of this website to see the newest creations, or contact me to get the updated patterns straight to you. Fitting In Knitting is now also on facebook, twitter and instagram and so check these out if you fancy little sneaky previews of projects as they evolve.

How to Knit A Pumpkin 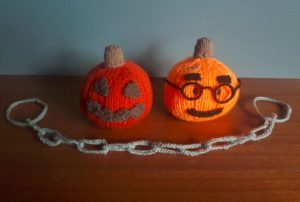 Made from a knitted pumpkin piece, a small knitted stem, and some smaller knitted pieces to make your desired facial features. All pieces are sewn together with some optional stitching for an extra twist!

Knit Your Own Pumpkin...

Get some ideas, see what you will need and follow the patterns to learn exactly how you can make your own...

I aim to have a new pattern up on the website every few weeks (children and their busy schedules permitting!) and I'll let you know as soon as the next one is up and ready to go... 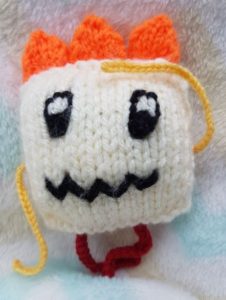 Get the Latest Updates!