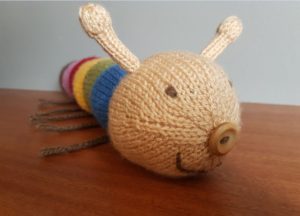 How to Knit a Caterpillar

What you will need... 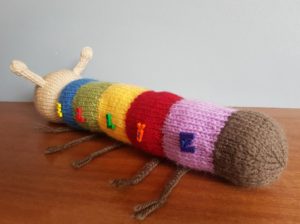 St-st = stocking stitch. Alternating a row of knit stitches (right side), with a row of purl stitches (wrong side).

Inc = Increase - by knitting into the front and the back of the same stitch, to make two stitches out of one.

K2tog = Decrease by knitting two stitches together, making one stitch from two.

Cast On - I use the thumb method

B&t tightly - Break off yarn and thread yarn through the remaining stitches on needle, pull up tightly and fasten off.

If sewing isn't your strong point, these little buttons with their choking hazard should obviously be avoided for small children. They're also not the comfiest to cuddle for babies. Leaving the caterpillar plain or using fabric numbers is probably a better bet.

Vary colours to your preference, and vary the length by adding extra segments.

Made from four knitted pieces - the head piece, two antennae, and a long single body piece made of 5 coloured segments and the rear end. There are 5 finger-knitted pieces which help to form his 10 legs. All pieces are sewn together with added decorative side buttons, a nose button and sewn-on facial features. 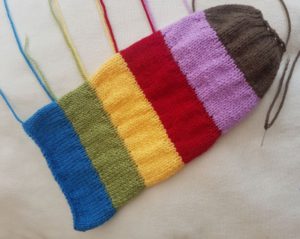 Make 1 for Each Caterpillar

Yarn Blue (or as per preference)

Repeat pattern from * to ** 4 further times to make a total of 5 body segments, then continue as follows to form the bottom end of your caterpillar.

In colour required for his bottom P 1 row 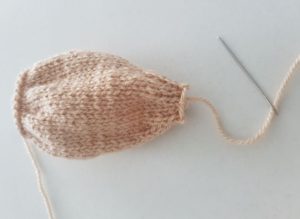 Make 1 for Each Caterpillar 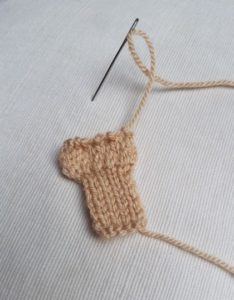 Make 2 for Each Caterpillar

Next row incKwise into every st (12sts) 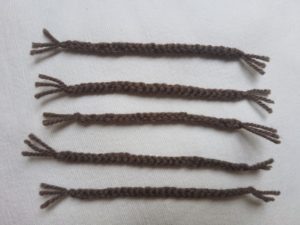 Make 5 for Each Caterpillar

(Each piece makes a pair of legs, forming a total of 10 legs)

For thicker legs, you may with to use chunky wool, but I have used three 90cm triple lengths of yarn.

Cut three lengths of yarn to around 90cm, placing them together.

Finger-knit from one end to your desired length.

Depending on your tension, 90cm of triple regular yarn will result in finger-knitted lengths of up to around 13cm.

With both ends of your finger knitting fastened off, cut the yarn ends leaving yarn ends approximately 1cm, each hanging freely to form 'toes'.

You may wish to leave your caterpillar plain, but adding the lettering at this point (before the caterpillar is sewn up) will allow you to fasten off loose ends more easily, hidden within the caterpillar.

I have sewn on buttons positioned a quarter of the way from the edge of the body piece to allow the completed letters to lie directly on the side of the caterpillars body when made up. 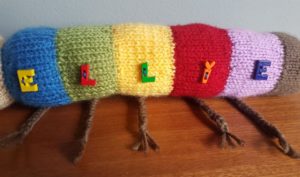 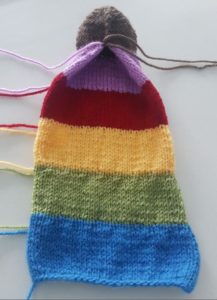 Beginning at the caterpillars rear end (brown), oversew row ends down the entire length, with wrong side of stocking-stitch on the outside.

Sew up each segment in the co-ordinating colour by using the broken off yarn ends of each segment.

Turn right-side out and begin stuffing the caterpillar. Stuffing one segment at a time will allow a more even filling.

Leave neck open at this stage. 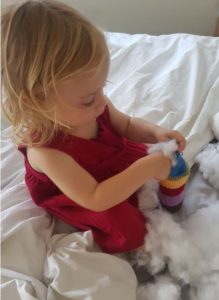 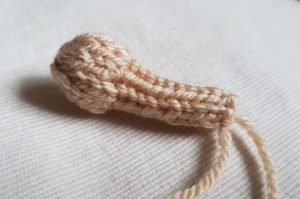 Beginning at the B&t 'nose' end of the head piece, and with the wrong side of stocking stitch on the outside, oversew row ends down the entire length. Then turn right-side out.

Facial features, including a decorative button for his nose, may be sewn on at this point to allow fastening off of loose ends more discretely. Eyes are sewn and positioned symmetrically, 2 clear knitted rows above where the 'decrease' knitted rows commence.

With facial features in place, then stuff the head firmly to give it a full shape, leaving neck open at this stage.

For the antennae, oversew row ends of the knitted pieces with right side of stocking stitch on the outside, adding stuffing as you go.

Position antennae to top of head symmetrically as shown. 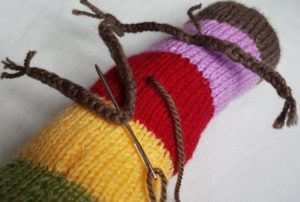 And Lastly the legs...

Fold the finger knitted legs in half (as seen in photo) to find the centre, and attach this point to the centre of each segment, at the point where row ends are sewn together.

There you have your cheerful chappy! 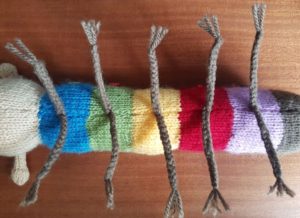 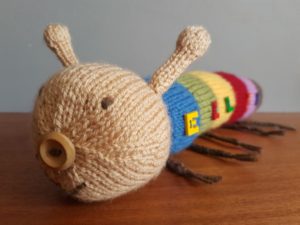 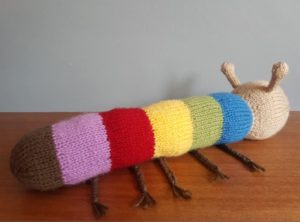 Choose your own colours and lettering/numbers to make him a little individual. Try different button noses, or even choose your own facial expression!

To make the pattern quicker and simpler, the increase and decrease rows at the start and end of each coloured segment may be done as plain knitted rows. This will just result in a smoother body.

Finger knitted legs were my choice for speed and ease but proper little feet might be worth the extra time. (Perhaps use the pattern from the little monster feet, making the legs slightly longer for a caterpillar.)

Makes a perfect knitted toy for a child to cuddle, a nice decoration, or add extra segments to the body for extra length to make a nice characterful knitted draught excluder!

These patterns are all made up as I go along, learning from mistakes along the way. Every time I create a new pattern, I record it in the Updates part of this site (effectively my blog…)  There is a story behind each creation, and this can help give you some more ideas and encouragement.

Feel free to share your successes or any other tips or suggestions by emailing me. If it's all gone swimmingly and you're ready for you next challenge, have a look at what to try next!